Posted at 16:39h in Uncategorised by Tereza

In the build up to the premiere of Satori we got hold of film director Rick Wall to ask him a few questions:

What does Satori mean?
Satori is a Japanese Buddhist term for ‘awakening’. In the Zen Buddhist tradition, satori refers to the experience of kenshō “seeing into ‘one’s true nature’. Satori is simply a feeling you get in waves of consequence. You can be ‘in the zone’, ‘connected’ or ‘present’; ‘Stoked’ can be another word for satori. I think if you are completely present and in the moment with whatever you set out to do, you will achieve a sense of satori.

The name actually came to me while working on my previous film “Tour of Ara”. One of the characters I was interviewing referred to his experience, while cycling in the Karoo, as a feeling of full ‘satori’ or ‘elation’ and ‘bliss’ and surfing big waves and being present in the ocean surrounded by nature is exactly that feeling. So that’s where the name satori comes from.

How long has the project been in the pipeline?
This film came about from a ritual that happens every time we head out there. You start getting those early morning messages in the dark from your friends asking how big the surf is and then you make the call to head out, the nervous excitement when you paddle out. Once you get out there you take a deep breath and realize this is exactly where you want to be. Nothing beats that and I thought I have to capture all of this through my eyes.

Where is it filmed?
Kommetjie and surrounding areas. The main surf break in the film is Dungeons and I also filmed some sessions at Sunset.

Who are the main characters?
When I decided to start filming this project I said to myself you have to interview everyone that surfs out there, that was very important to me; And I did that, I have over 36 hours of interviews. But as I started looking through and selecting interview pieces for the film, I realized that I wanted the film to be my story.  So the characters in the film are surfers that I have crossed paths with in some way, shape or form through my years of surfing out there. They are guys that I look up to and respect. I was able to capture their authenticity and passion on film because I had a connection to them. 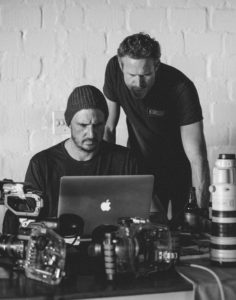 Over what time period have you filmed Satori?
I filmed everything in 2018: I started filming in April and we finished on this last big swell in September.

Although it is obviously a surf film and more specifically a big wave surf film, do you feel it appeals to a broader audience?
Yes for sure. It’s definitely a big wave surf film but I feel you haven’t seen it from this angle before. I want the audience to be inspired by these characters’ passion and dedication to the ocean, and ultimately to go out there and find their own ‘satori’ in whatever they are passionate about.

Where do you find your satori and can you transfer this to other areas of your life?
It’s a phrase that has been used over, and over but being present is a very powerful state to be in. I really believe that you can’t go out and surf 15-20ft waves without being completely present and in the moment. If you can bring that level of commitment and concentration into other areas of our life, you will feel a sense of calmness which will help you overcome barriers.

Check out the SALE! Dismiss